There are occasions when Tantric massage can add to a special event and on this occasion it was to celebrate a birthday.

This event was unusual in some ways and did remind of the  possibilities when gathering a small group of people together.

What follows is a more detailed description of the birthday dinner. 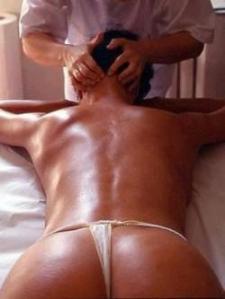 The invitation was to be part of a small birthday celebration at the home of some friends.

It was the birthday of a friend of theirs and they wanted to organize a memorable, but ‘civilized’, party.

My friends have been Tantric massage visitors for a few years and I’ve known them through their visits and various art gatherings, exhibitions etc.

What they arranged for their friend is worth a few words since it was so carefully planned and worked so well.

The plan was quite simple. They invited their birthday friend (he’s unattached) and 2  m/f couples, for a surprise birthday dinner. That made a party of seven including the hosts who are a m/m couple.

The surprise for the birthday guest was to be that everybody could receive a massage throughout the evening – if they chose. I was invited to provide the massages.

What made the plan particularly interesting, and provided the performance art & Tantric aspect, was that the massage table was set up in the dining room. So while the others were eating, the guest receiving massage could be watched from the dining table.

My friends saw this not only as a birthday gift of Tantric massage, but also as performance art.

Initially the massage table was draped and disguised. When everybody was seated for dinner, and comfortable – there had been drinks etc. before sitting down – the hosts uncovered the massage table and announced the evening’s ‘birthday present’.

The initial surprise announcement was well received – all guests were on the same page – and was greeted with appreciation and enormous positive energy.

The hosts explained that the order of massage would be random. Cards would be dealt to each person prior to each massage. The highest card would be the next massage.

Massages would last around 15 mins. Some obvious logistcal questions arose. The random playing card routine handled who would be first, but then questions about what to wear/not to wear/how intimate/oil etc. – all were asked.

The hosts said that all that was necessary was for everyone to enjoy themselves within their own comfort level – obviously it was equally acceptable to take a pass and just watch.

My task was to provide massage entirely according to the wishes of the guest. The hosts and the table would ensure that the guest was heard and understood.

The dress for the evening was smart/casual. The group comprised of very open minded people, of course, but it can never be assumed that all sizes always fit everybody, whatever the past experiences.

In this case everybody seemed totally into the activity.

So, as the party talked and decided I prepared the massage table, oil, towels etc.

The cards were dealt for the first time, and exposed. The highest belonged to one of the partnered males.

The hosts had set a screen for changing and with the encouragement of all, especially his partner, the first ‘high card’ retired behind the screen to prepare.

There were towels behind the screen and the guest emerged wearing one of them around his waist, to much applause.

He climbed onto the table, face down. The hosts asked if he wanted to keep the towel on and of course the group encouraged him to discard it. That was his choice so I removed it.

I started the massage of his back immediately as the party enjoyed their meal and enjoyed the visual of the massage. I checked if it was OK to use oil. It was. The plan was to allow approx. equal time on both back and front.

Now the time came for him to turn over. Again the question – did he want a towel? Hoots of laughter from the table encouraging no towel! I whispered in his ear, checking his preference.

The turn over revealed that he was clearly enjoying the time and he was cheered by the ‘audience’. I massaged, with limitations, his front, figuring that his partner or others could continue the massage themselves, at a later time, if that was the plan.

The front massage was over soon enough – too soon, probably for the guest – and he rolled off the table, standing to take a mock bow.

The hosts then asked him whether he wanted to get dressed again or just recover the towel. Whatever he decided likely would set the precedent for the evening.

His partner called out that he should remain as he was – naked and well oiled. That received the support of the table, so I handed him the towel and he resumed his seat, a nude male at a table of smartly dressed diners. Performance art takes many forms.

New cards were dealt and this time the high card was the ‘birthday’ guest. The timing seemed appropriate.

We all sang happy birthday when he turned over. As with the previous guest, he didn’t ask to be draped with his towel or recover his clothes, so the table now included two naked male guests.

The next card selection only included the remaining five guests, of course. The high card fell to the female partner of the male who hadn’t yet had a massage.

Tantric massage is approached with respect and with a practical neutrality regarding gender. The experience must also always respect individual preferences, expectations and comfort levels.

The hosts checked carefully again that the massage experience would be within the lady’s comfort level.

She reassured everybody that this was exactly where she wanted to be and emerged from her seat at the table. After a stop behind the screen for a towel she climbed onto the massage table and I spent 10 mins. massaging her back. Then turn over time came. I whispered in her ear, asking if she wanted to continue, and with or without the towel.

The reply was a very clear “yes”, and without the towel, and she flipped over immediately. By the end of the massage she was as happy as her two previous companion diners.

On leaving the massage table she said she no longer has use for her dress that evening and joined the others at the table.

It happened that the next high card was the remaining female and she followed the same easy pattern as the previous guest.

The remaining guests for massage were the males, of course, and by the end the vibe in the room was certainly ‘electric’.

It was a long and enjoyable evening. The energy was entirely positive and although the evening was long there was little time to have any thoughts of fatigue.

I’ve also been told that the guest of honour found this to be his best birthday present, ever!

Tantric approaches and experiences can be used to raise energy and heighten awareness in many situations. This was an event that wasn’t difficult to imagine or organize and led to an unforgettable experience for all present.